Boeing said on Monday that it had fired its chief executive, Dennis A. Muilenburg, who was unable to stabilize the company after two crashes involving its best-selling 737 Max plane killed 346 people and set off the worst crisis in the manufacturing giant’s 103-year history.

The plane has been grounded by regulators since March, and the company and its airline customers have lost billions of dollars. Boeing has faced a series of delays as it tries to fix the Max, and the jetliner’s return to the air remains months away at best.

President Trump recently called Mr. Muilenburg for an update on how the company was doing, underscoring its importance to the American economy. Last week, Boeing said it would temporarily shut down production of the Max, a decision that will force some of the 8,000 companies in the supply chain to scale back production and perhaps lay off workers.

Mr. Muilenburg’s performance during the crisis angered lawmakers, airlines, regulators and victims’ families. He repeatedly made overly optimistic projections about how quickly the plane would be allowed to fly again. That created chaos for airlines, which had to cancel thousands of flights.

The Federal Aviation Administration saw the pronouncements as an attempt to pressure it to clear the Max for service. Mr. Muilenburg’s attempts to offer sincere public apologies for the accidents, including at two congressional hearings in October, have been clumsy, inflicting further damage on Boeing’s reputation.

The grounding has already cost Boeing more than $8 billion, a figure that will rise sharply, and shaved 20 percent off the company’s stock price. The last week was especially brutal for the company. In addition to announcing the production halt, Boeing botched the launch of a space capsule designed for the National Aeronautics and Space Administration.

With no timetable for the return of the Max, the future of Boeing is unsettled. In the coming months, the company’s new leaders must prove to skeptical regulators that the plane is safe to fly. It must also regain the trust of its principal Max customers — the airlines that pay as much as $100 million per airplane — and ultimately the flying public.

In discussions among themselves in recent days, board members concluded that it was time to replace Mr. Muilenburg, according to two people familiar with the matter. On Sunday morning, the board scheduled a call for 5 p.m. Eastern time to discuss Mr. Muilenburg’s future.

On the call, the board members, who were scattered around the country preparing for the holidays, made the unanimous decision to remove Mr. Muilenburg.

Mr. Calhoun, who was in New York, and Larry Kellner, a board member and former airline executive who is Mr. Calhoun’s immediate replacement as chairman, called Mr. Muilenburg to inform him of the decision, according to a person familiar with the situation. The call was brief.

It was a striking turnaround. At a board meeting last week in Chicago, where the Max factory production shutdown was deliberated, there was no talk of removing Mr. Muilenburg, according to two people familiar with the matter. On Friday, a company spokesman said Mr. Calhoun stood by comments he made in November, saying the board supported Mr. Muilenburg.

Mr. Calhoun, 62, who started his career at General Electric and ran G.E.’s airplane-engine business in the aftermath of the Sept. 11, 2001, attacks, faces a daunting challenge. Before the Max can fly again, regulators must approve Boeing’s fix for an automated system, known as MCAS, that was found to have played a role in both crashes. The company still needs to provide the F.A.A. with all the documents needed to fully describe the software fix.

Boeing is working through technical issues as well. In simulator tests this month, airline pilots did not use the designated procedures during emergencies, instead relying on their own skills to handle problems. That raised new questions about whether regulators will require more extensive training for pilots to fly the plane or whether the procedures need to be changed, according to two people briefed on the matter.

The development of the Max, an updated version of Boeing’s popular 737 jet, was begun under competitive pressure in 2011 as the company sought to fend off competition from its European rival, Airbus. The two crashes have prompted investigations by prosecutors, regulators and two congressional committees into whether Boeing overlooked safety risks and played down the need for pilot training in its effort to design, produce and certify the plane as quickly as possible.

The F.A.A., whose relationship with Mr. Muilenburg had grown increasingly tense during the Max crisis, said on Monday that it did not comment on personnel decisions, but that it was continuing work on approving the plane and had “set no time frame for when the work will be completed.”

A spokesman for the agency said it expected that Boeing would “support that process by focusing on the quality and timeliness of data submittals for F.A.A. review, as well as being transparent in its relationship with the F.A.A. as safety regulator.”

In a note sent to employees on Monday, Mr. Smith, the interim chief executive, pledged “full transparency, including effective and proactive communications with the F.A.A., other global regulators and our customers.”

“This has obviously been a difficult time for our company,” Mr. Smith added in the note, a copy of which was reviewed by The New York Times. “I am committed to ensuring above all that we meet the needs of our stakeholders — especially our regulators, customers and employees — with transparency and humility.”

Mr. Muilenburg is an engineer who had spent his entire career at Boeing, rising to become chief executive in 2015. He spent much of last week at Boeing’s headquarters in Chicago, taking calls and attending meetings related to the Max crisis and the company’s decision to shut down the Max factory. Though executives viewed the production halt as a prudent step, it sent Boeing’s stock down and rippled through the national economy.

Days after that decision, the F.A.A. became aware of more potentially damaging messages from Boeing employees that the company had not turned over to the agency, further straining the company’s relationship with the regulator. Boeing waited months this year to disclose to the F.A.A. that it had found messages from 2016 in which a Boeing pilot complained that MCAS, which was new to the Max, was acting unpredictably in a flight simulator.

On Friday morning, Mr. Muilenburg was in Florida to observe the predawn launch of the Boeing Starliner, a space capsule the company built for NASA.

Soon after the spacecraft was launched, it went off track because a clock was not set correctly, failing to reach the correct orbit and rendezvous with the International Space Station. The botched Starliner mission was a crushing blow to company morale, with employees desperate for good news after a difficult year.

Yet Mr. Muilenburg, who updated the board about the mission, remained positive and emphasized what had gone right, according to three people with knowledge of the matter. His response was seen as another sign of his being overly optimistic about the company’s challenges.

On Sunday morning, The Times published an article detailing Mr. Muilenburg’s tattered relationship with the F.A.A. and airlines. In it, Gary Kelly, the chief executive of Southwest Airlines, which is Boeing’s largest 737 customer, said of Boeing that “this hasn’t been their best and finest hour.”

By the end of the day, Mr. Muilenburg was out.

Boeing said in a statement on Monday that its board “decided that a change in leadership was necessary to restore confidence in the company moving forward as it works to repair relationships with regulators, customers and all other stakeholders.”

Mr. Calhoun, an experienced executive who was elevated to chairman in October when the board stripped Mr. Muilenburg of that title, is viewed internally as a more natural public communicator than Mr. Muilenburg. In the course of the board’s routine succession planning in recent months, Mr. Calhoun was identified as the likely successor if Mr. Muilenburg needed to be removed.

Mr. Calhoun spent Monday calling government officials, including the head of the F.A.A., Stephen Dickson; members of Congress; the chief executives of major airlines; as well as Boeing investors and executives for the company’s suppliers, pledging to keep the lines of communication open, a Boeing spokesman said.

Yet some key lawmakers remained skeptical.

“What is most dispiriting is appointing Calhoun as C.E.O. after he said that Dennis was doing everything right,” said Senator Richard Blumenthal, Democrat of Connecticut. “That certainly leaves the impression that it will be business as usual. What’s needed now is a complete house cleaning, not only in personnel but in culture.”

Mr. Blumenthal, who did not speak with Mr. Calhoun on Monday, called for a new Boeing hearing with the new chief executive as soon as possible.

But to some aviation officials and relatives of crash victims, who were deeply frustrated by Mr. Muilenburg’s performance, the management change was welcome news.

“Mr. Muilenburg’s resignation is a good first step toward restoring Boeing to a company that focuses on safety and innovation,” said Michael Stumo, whose daughter Samya was killed in the second Max crash.

It was not immediately clear how much compensation Mr. Muilenburg would receive as he exited the company.

“Today is a turning point,” Sara Nelson, the president of the Association of Flight Attendants union, said in an interview. “Public trust was lost, and Boeing only has the chance for redemption with new leadership.” 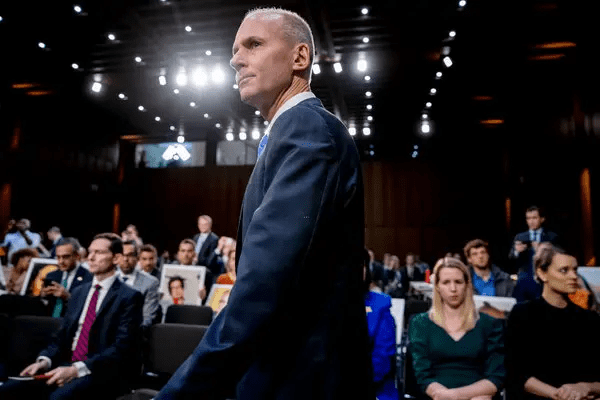